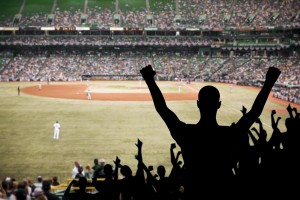 Known as “America’s pastime,” the sport of baseball has a large following both inside the US and around the world. The highest level of baseball in the US is Major League Baseball (MLB). MLB touches on a huge amount of content, as most of the 162 regular season games played by 30 different teams are broadcasted on television, radio, and the web. With so much work, sports broadcasting for MLB is worth a look for students in sports broadcasting programs.

The first place you can go to check on jobs in sports broadcasting for MLB is through the MLB itself. Students looking into internet broadcasting will enjoy the myriad of opportunities with MLB Advanced Media, which operates MLB.com and each of the 30 individual team sites as they stream broadcasts and create other unique user experiences. Also in-house is the MLB Network, a baseball television station that airs live games in addition to baseball news coverage and other baseball programming.

There are even more opportunities in sports broadcasting for MLB with various other radio and television stations. In addition to the MLB Network, ESPN, TBS, Fox, and the Spanish-language Fox Deportes all have national television broadcasting contracts with MLB. ESPN Radio broadcasts two games nationally each weekend. In addition, dozens of local television and radio stations regularly cover games for their respective teams. This huge volume of broadcasters, in combination with the high amount of games played, offers numerous work opportunities to aspiring baseball broadcasters.

Another advantage for international students looking into sports broadcasting for MLB is the glut of non-English language broadcasts offering a number of work opportunities. With its huge popularity in Latin America, MLB is broadcasted by dozens of Spanish-language radio stations and even a few Spanish-language television stations in the US. If you’re looking to cover MLB outside the US, then you will want to ensure you search networks like ESPN Deportes, ESPN India, and MBC Sports+ since they broadcast MLB games in countries as diverse as Brazil, India, and South Korea.

No Responses to “Sports Broadcasting for MLB”