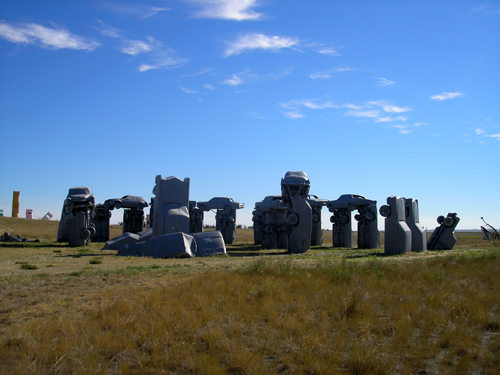 3100 BCE , Wilshire, United Kingdom- It took three stages and an estimated 30 million hours of labor to build the world famous Stonehenge. No one knows why this iconic structure was built, perhaps for human sacrifice or worship.

Stonehenge has made its appearance in TV shows and movies, on board games and t-shirts.

But more than 4,000 miles away, across the Atlantic Ocean sits a unique replica of Stonehenge in the Midwest of the United States on the western half of Nebraska. It is not made from Bluestone, Sarsen and Welsh Sandstone like the original. It is made from cars.

Named Carhenge, the replica is a memorial to the artist’s father who lived on a farm that is now the location of the copy. Jim Reinders, the artist, had time to study Stonehenge while living in England.

35 family members gathered five years after his father’s death to build the replica in June 1987 and the dedication was done on the summer solstice.

“Thirty-eight automobiles were placed to assume the same proportions as Stonehenge with the circle measuring approximately 96 feet in diameter,” according to Carhenge’s website.

The cars are painted gray to resemble the behemoth stones of Stonehenge and include three standing trilithons within the circle, the heel stone, slaughter stone, and two station stones. The heel stone is a 1967 Cadillac.

Reinders donated the 10 acres of land that Carhenge rests on and is now overseen by the Friends of Carhenge.

Other sculptures are on site to view as part of the Car Art Reserve, is including a giant salmon created by a Canadian man and a dinosaur.

International students in Nebraska will find Carhenge a quirky daytrip. The attraction is open 24/7, 365 days a year and is located right outside of Alliance. Picnic tables are on site.

This entry was posted on Tuesday, May 8th, 2012 at 1:57 pm and is filed under International Student. You can follow any responses to this entry through the RSS 2.0 feed. You can leave a response, or trackback from your own site.

2 Responses to “Stonehenge in Nebraska”