Top 5 Languages Spoken Around the World 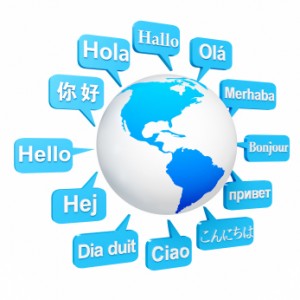 Mandarin (Chinese) â€“ As the world’s most populous country it is no surprise that Mandarin is also the most commonly spoken language around the world. With a population of over 1.3 billion people, there are many different Mandarin dialects that vary widely across the country – in fact, it varies so much that people from different regions may not understand each other. Most people think of Chinese as Mandarin Chinese, which is the official language of the country, and it is also the most widely spoken of all the Chinese dialects.

Spanish â€“ As the official language in the majority of countries across Central and South America, Spanish has the second largest number of speakers around the world. Spanish is also spoken throughout Spain and in many parts of the United States. Language variations exist between speakers from different countries where words and phrases, and even pronunciation, can vary.

English â€“ For non-English speaking students, English is most likely on the top of their second language list. Since English is widely considered to be the international language for Business, many students consider it to be top priority. International students who want to learn English usually consider studying in the USA, UK or Australia, but there are also many other English as a second language schools all around the world.

Arabic â€“ Arabic is the official language for countries located in North Africa and the Middle East. Just like the other languages on this list there is a high degree of language variation depending on region and country.

The decision of which language you should study is not a complex one, but it should not be based solely on how popular a language is either. Knowing how many people around the world is only part of this decision. No matter which language you study, if you are serious about it, consider studying in the country where your language is natively spoken. Check out our study abroad center to find a program that interest you.

This entry was posted on Saturday, May 12th, 2012 at 7:02 am and is filed under ESL/ English as a Second Language, International Communications, International Student. You can follow any responses to this entry through the RSS 2.0 feed. You can leave a response, or trackback from your own site.

11 Responses to “Top 5 Languages Spoken Around the World”