Join Our Live Video Event As We Visit Valencia College 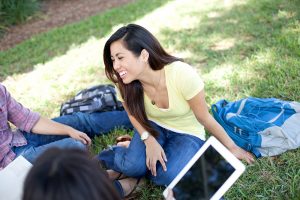 Join our live video event as we visit Valencia College at their campus in Orlando, Florida on Friday, October 20th 2017.

In this free event you’ll have the opportunity to ask your questions to Talia, the Director of the International Student Office. You’ll also meet May, a current international student at Valencia College from Brazil.

Not only will you be able to ask questions during the event, but you will also learn why many international students choose to study at Valencia College. For starters, Valencia College is located where the sun shines year-round and fun is just around the corner. Orlando is home to theme parks such as Walt Disney World and Universal Studios. When you’re not riding rollercoasters at Universal’s Harry Potter World, you can enjoy sporting events like an Orlando Magic basketball game or an Orlando City soccer game. There’s also tons of live music events, shopping, clubs and food you can enjoy!

During the event you will also learn what an A.A. degree is. Valencia College primarily offers two-year associate degree programs. After graduation, those first two years count towards your bachelor’s degree. Many people choose to study at a community college because it prepares them better for a four-year college. For students that study at Valencia it guarantees that they will be accepted into a four-year Florida school. This can be a good choice for you if you think you might need extra help your first few years in college. Later you can apply want to a top-tier university that would normally be harder to apply for.

Now that we’ve gotten your attention, it’s time for you to mark your calendar for our live-video event with Valencia College!

This entry was posted on Friday, October 13th, 2017 at 4:30 am and is filed under International Student. You can follow any responses to this entry through the RSS 2.0 feed. You can leave a response, or trackback from your own site.

Marketing Coordinator Rachel joined EIC in 2016 after graduating from the University of North Florida. Her engagements at her campus, and community have only influenced her to continuously learn and understand her surroundings and beyond.

Other posts by Rachel Rollins