Working as a Recording Engineer 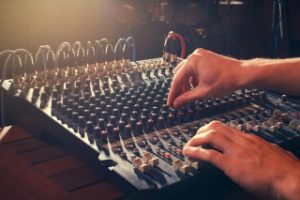 Working as a recording engineer means being responsible for preparing the studio for a recording session, operating the mixing console, and maintaining all electronic studio equipment and instruments. The recording engineer is in charge of the mix and overall sound of an album. Individual components of a trackâ€”strings, drums, vocals, etc.â€”are recorded separately, and it is the job of the recording engineer to combine and manipulate each track to the greatest possible effect, tweaking tone, intensity, and tempo, applying effects, and editing.

A recording engineering degree is not necessarily required for working as a recording engineer, but is the most effective means to gain the skills necessary to be successful in the business. Courses in music appreciation and composition are helpful, as well as classes in computer technology and programming. The ability to read music and play at least one instrument is also a plus. When starting out in the business, it is a good idea to gain additional experience with the hardware and mixing consoles used in studio recording by working in a small studio as an apprentice, assistant, or intern.

Working as a recording engineer means keeping long, irregular hours. It is not unusual for a recording session to begin early in the morning and run late into the night, or even until the following morning. Turnaround after a recording session is quick; when one ends, preparation for the next begins almost immediately. A recording engineer must be flexible, patient, and creative, even when running on little or no sleep. No matter how exhausted, the engineer is expected to capture the best recordings possible and keep everything running smoothly.

No Responses to “Working as a Recording Engineer”