Holidays to Celebrate in the US as an International Student 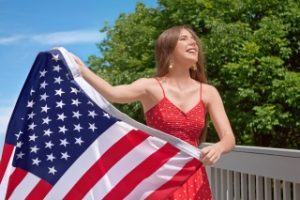 One of the greatest ways to become immersed in American culture as an international student is by celebrating traditional American holidays. Holidays like Thanksgiving, Memorial Day, Fourth of July, Veterans’ Day, and MLK day all celebrate American culture and accomplishments. On the Fourth of July you may see festivities such as fireworks and parades, both of which are fun ways to celebrate this holiday with friends and family. The Fourth of July is truly a celebration of American accomplishments because it was the day that the U.S. claimed its independence from Britain. Many people will be seen sporting patriotic decorations and wearing patriotic attire.

Some holidays, such as Veterans’ Day and Memorial Day, are celebrations of U.S. Veterans. These holidays are usually celebrated by taking a work day off and attending casual gatherings such as barbecues and cookouts. This type of celebration is great for meeting new people and getting to know old friends better. Usually, in the late afternoon, a memorial service, march, or parade is held to show appreciation for U.S. Veterans.

Another and perhaps the most notable holiday that celebrates American Culture is Thanksgiving. Thanksgiving is remembrance of the time that Pilgrims and Native Americans were brought together by giving thanks for a meal. It is a celebration of people of two very different cultures being bonded through food. Thanksgiving is a great opportunity for family and close friends to come together and give thanks over a meal. Traditionally, turkey, stuffing, cranberry sauce, and other comfort foods are eaten on Thanksgiving. As an international student, it is a good idea to share a Thanksgiving dinner with the family of a close friend or at a community center where other students will be dining. Thanksgiving will bring you and your desired dining companions together over a big and filling meal. You will chat and tell jokes while enjoying delicious food. It truly is one of the most notable American holidays and one of the many great ways to experience American culture as an international student in the United States.

Make sure you check out more on American culture before you become an international student in the United States.

This entry was posted on Friday, July 22nd, 2016 at 6:40 am and is filed under Study in the USA, USA Holidays/ Traditions. You can follow any responses to this entry through the RSS 2.0 feed. You can leave a response, or trackback from your own site.