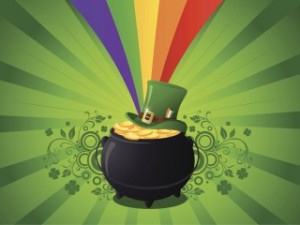 Want a pot of gold this St. Patrick’s Day? We’ve got you covered.

St. Patrick’s Day is a holiday originating from the Roman Catholic feast day of the patron saint of Ireland. According to Irish folklore a leprechaun has hidden a pot of gold at the end of every rainbow, this means anyone able to hunt down the end of the rainbow is able to keep the gold. In celebration of St. Patrick’s day on March 17th, we have decided to give one lucky follower of our Facebook, Google+ or Twitter page their own “pot of gold”*!

For a shot at finding the end of our rainbow, here’s what you need to do:

To find out if you are the lucky winner visit our Facebook, Google+ and Twitter page on March 18th.

*The “pot of gold” issued will be in the form of a $25 Amazon gift card. The winner must visit our Facebook, Google+ or Twitter page on March 18th to confirm if they are the winner and to claim the prize.

This entry was posted on Wednesday, February 26th, 2014 at 10:40 am and is filed under Competition, International Student. You can follow any responses to this entry through the RSS 2.0 feed. You can leave a response, or trackback from your own site.

And The TVC 2020 Winners Are…
Thanksgiving in 2020
US Election 2020: What to Know
Spring 2021 at Northwest Missouri State University