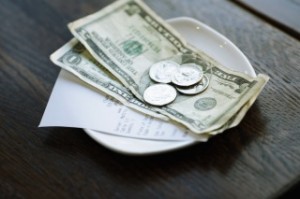 Food is universal. Who doesn’t like to eat? But culturally, food can vary wildly from country to country, which is what makes going out to eat such a fun experience! When it comes time to pay the bill, however, what do you do about the tip? Do you leave one? If so, how much? We’ve pulled together examples from a few countries to help you out with tipping etiquette while studying abroad.

Tipping etiquette while studying abroad in the United States is pretty straight forward: you always tip. In terms of a meal out, whether it is breakfast, lunch or dinner at a sit-down restaurant, the standard tip is 15-18% of the total bill. Almost all restaurants will have a designed spot on the bill for you to put the tip if you pay with a debit or credit card. However, no matter if you pay with cash or card, the standard percentage remains the same.

If you are at a bar or only ordered alcoholic beverages at a restaurant, the average tip is $1.00 per cocktail or beer. Likewise, at a specialty coffee shop, there will typically be a tip jar near the register. The standard tip per specialty beverage is also $1.00, though a number of people tend to just leave the change they receive back upon paying, which usually ends up being less than $1.00.

There is such a large emphasis placed on tipping in the United States, in contrast to the majority of Europe, because waiters, waitresses and bartenders rely on tips to make a living wage. The actual paychecks they receive are typically extremely minimal, because they are expected to make the majority of their money from tips.

Summary: If you are eating out or go out for drinks, tipping is mandatory.

Leaving a propina (“tip” in Spanish) is not at all common in Spain. There are very few situations in which Spaniards tips, such as a big restaurant bill or at a high class establishment, where they will normally tip a couple extra in Euro or pocket change. However, this will still vary depending on the the bill and the situation. The rules also differ for business meetings that take place over a meal in a restaurant, but the standard is that you will never tip for a coffee or a drink, nor for a meal out. In Spain, the waiters and waitresses are paid a normal wage and don’t rely on tips to supplement that.

If you feel compelled to leave a tip, you should know that the server may just put it in the register, discounting its importance or regarding it as minimal. Many times, the tip will go to the owner of the establishment. In addition, tipping is made difficult by the fact that you are typically served by more than one person, with all the workers present working together to take orders and deliver the food and beverages to the tables.

Summary: The general rule of thumb is don’t tip. Leave pocket change after a large or expensive meal, if that is your personal preference. For your every day coffees, drinks and meals, don’t sweat it. Tips are neither normal nor expected.

In France, the law states that a service charge is mandatory in all restaurants, though tipping is not necessary. Tipping for very good service, however, is very typical â€“ approximately 10% of the total bill or a couple of Euro, ranging from one to five Euro per person. When having a coffee or tea in a cafÃ©, change up to 50 cents is normally left, whereas a few Euros are left at dinner. Likewise, little but cents will be left for a few drinks out on the town. As in Spain, the waiters and waitresses in France are paid a livable income and do not rely on tips to make ends meet.

Summary: Tipping is normally reserved for excellent service, due to the already included service charge. If you want to tip, leave cents for a coffee, tea or drinks, and a few Euro for a full meal.

This entry was posted on Saturday, December 7th, 2013 at 8:13 am and is filed under International Student, Student Travel, Study Abroad. You can follow any responses to this entry through the RSS 2.0 feed. You can leave a response, or trackback from your own site.