How to Celebrate July 4th in the USA 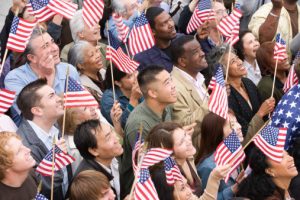 The Fourth of July is a national holiday that marks the Continental Congress’s adaptation of the Declaration of Independence in 1776, naming the thirteen colonies an independent nation. Every year on the Fourth of July the US becomes a frenzy of patriotic excitement as citizens celebrate their independence.

Since this day happens in a summer month international students can expect to see celebrations happening outside, as the Fourth of July is a day where Americans can really enjoy the warm weather. If you’re going to be in the United States during the Fourth of July, here are some traditions you can (and should) participate in!

Regardless of how you choose to spend your Fourth of July in the United States we hope you enjoy the experience! Celebrating the Independence of a country that isn’t your home can be both opening and humbling , so try to keep an open mind towards holidays and traditions that may be a little different and be sure to savor the barbecue!

This entry was posted on Friday, July 1st, 2016 at 5:55 am and is filed under International Student, Study in the USA, USA Holidays/ Traditions. You can follow any responses to this entry through the RSS 2.0 feed. You can leave a response, or trackback from your own site.

No Responses to “How to Celebrate July 4th in the USA”