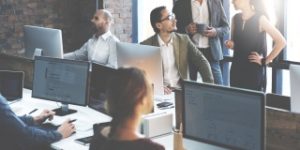 Some educators and administrators, however, are more successful than others. Take, by way of example, MBA programs. A recent U.S. News and World Reports study found that the while the average international student MBA program enrollment was 32%, the ten schools with the most international students had, at 63%, nearly twice as many. Unsurprisingly, given the state’s popularity among international students in general, it was a California school that led the pack. What is downright astounding, however, is how close the competition was: while some 78% of the University of California at Riverside’s MBA students were not from the US, the Whitman School of Management at Syracuse University, with 68%, was close behind.

No longer are brick and mortar schools the only ones working to capitalize on this trend. In response to such high demand, a growing number of schools are offering online graduate business programs to students who are unable to relocate to a different country to study. If you’re interested in studying business you can view further information here.

This entry was posted on Friday, September 23rd, 2016 at 6:30 am and is filed under International Student, Study in the USA. You can follow any responses to this entry through the RSS 2.0 feed. You can leave a response, or trackback from your own site.

No Responses to “Business Schools are Big Business with International Students”