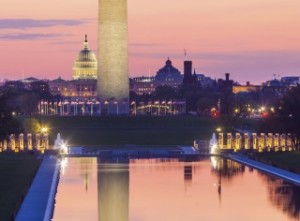 Spring break is a great time to rejuvenate before your last big push of the year during finals week. Although many students head to the beach or take a trip home during spring break, others know that it’s also a great time to have fun while still learning! If you’re included in the latter, we have a few great destination suggestions for spring break travel to compliment your degree (or at least provide a few talking points during an interview).

1. Political Science Majors: Washington D.C.
Taking a trip to Washington D.C., the capitol of the United States, is something that every international student studying political science should have on their “to-do” list before they head home. Not only will this allow you to see numerous monuments like that of Martin Luther King Jr., Lincoln, Jefferson, and Vietnam veterans, but you’ll also have access to the Smithsonian Institution museums. Plus, if you book early enough in advance you can schedule a tour of the White House or Capitol.

2. Music Majors: Nashville, TN
Nashville has the nickname “Music City USA” for a good reason- it’s home to the Grand Ole Opry, Country Music Hall of Fame and Ryman Auditorium, and it’s also where numerous music stars have made their start in the music business- including Elvis Presley.

3. Anthropology Majors: Taos Pueblo, NM
As the longest surviving multi-storied Pueblo structure in the US, the Taos Pueblo is a must see for anthropology majors (and history majors). In fact, in 1992 the pueblo was admitted by the United Nations into the “World Heritage List” making it a hot spot for visitors from around the world. During your visit you’ll be able to learn about the history and culture of the Taos Pueblo people and see traditional sculpture, painting, jewelry and pottery. If you’re able to time it right, you might also be able to see traditional dances and songs during a feast day.

4. Tourism Majors: Orlando, FL
A visit to Orlando, Florida for a trip to one of the Disney parks must be made if you’re pursuing a tourism or hospitality degree. Disney parks are some of the highest attended in the world, and the Magic Kingdom in Orlando leads the pack. In 2014 the Magic Kingdom had 19,332,000 guests- visit the park and see first-hand what they’re doing right within the tourism industry to draw in such a vast amount of visitors.

5. Arts Majors: New York, NY
Whether you want to call it “The big apple”, “The city that never sleeps”, or simply New York City, it’s hard to deny that it’s a top spot for anyone pursuing a degree within the arts. If dance or show production is your forte you’ll of course have access to some of the top performances in the world, including those on Broadway. If you prefer the fine arts you have a number of museums including the Metropolitan Museum of Art and the Guggenheim at your fingertips. Not only will you have access to these more structured art events, but you will be exposed to art around every corner: street art, sculptures, and architecture, the list goes on as there’s no shortage of art within New York City.

This entry was posted on Monday, February 22nd, 2016 at 7:32 am and is filed under International Student, Study in the USA. You can follow any responses to this entry through the RSS 2.0 feed. You can leave a response, or trackback from your own site.

2 Responses to “Spring Break Travel to Compliment your Degree”