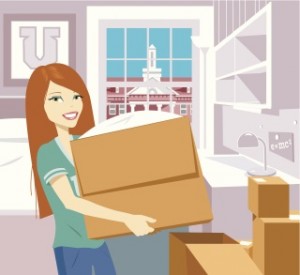 Many international students inside the United States will live the dorms (also known as residence hall) during their first semester or year. Not only is this a great way to save money as dorms are often cheaper than living in an apartment, but it’s a great way to meet new students. However, living in a dorm will typically mean you have a roommate and less living space than a house or apartment. Because of this, here are 5 door room items every international student will need.

1. Shower Shoes:
Whether you’re sharing a shower with 3 other roommates or an entire floor- you will want to buy shower shoes unless your shower is deeply cleaned often. Having shower shoes can help prevent you from picking up or passing along foot fungus- something that often runs ramped through shared showering facilities. If your dorm has a shared shower for the entire floor then shower shoes will also come in hand for the walk to and from the bathroom.

2. Shower Caddy:
Trying to lug your shampoo, soap, body scrubs, washcloth, lotions and numerous other shower products while holding up a towel isn’t the easiest endeavor. Because of this, investing in a shower caddy is well worth the money, plus, they’re fairly inexpensive. Make sure that you find a caddy that allows water to drain out to prevent mold from growing and that it’s compatible with your shower. For example, if your shower has a shelf but not a hook- buy a caddy that you easily sit on the shelf, and vice versa: if your shower has a hook but not a shelf, make sure you find a caddy that will easily hang from the hook without falling.

3. A Lock-box:
Even if you trust your roommate with the fire of a thousand suns, more than likely you’ll have numerous visitors in and out of your room throughout the semester. Alternatively, if a door is accidentally left unlocked it could cause unwanted visitors to stray in. Because of this, having a small box with a lock will allow you keep your valuable items kept safe.

4. Earphones:
If you love watching YouTube videos and movies or listening to music that your roommate isn’t crazy about then it’s polite to use earphones. If you’re not both agreeance on watching something then using headphones is a great way to show respect to your roommate and keep the peace.

5. Microwavable snacks:
Most dorms don’t have a stove but will often come equipped with or allow you to rent/bring your own microwave. Although your microwave should not be the means to how all of your meals are prepared, it can be a great way to give you access to late night study session snacks like popcorn, ramen, mug brownies and other treats to help keep your focus on your books.

This entry was posted on Tuesday, February 9th, 2016 at 7:32 am and is filed under Back to School, International Student, Study in the USA. You can follow any responses to this entry through the RSS 2.0 feed. You can leave a response, or trackback from your own site.