Watch Live to Get the Dirt on Picking Your Major 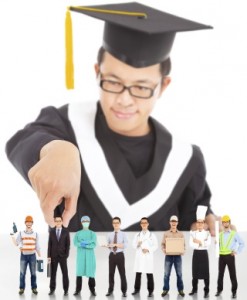 Here’s a scary thought: Declaring your major means you’ve made your final choice when it comes to what career path you want to pursue. This decision is not an easy one and should be made only after you’ve researched and carefully considered your options. If you need help choosing a major, we have a live hangout Friday, September 26th at 11am EST.

During this hangout I will share 5 things that you must consider before making a final choice when picking your major. You’ll also see the top-hiring industries of 2014 along with the 2014 salary averages by industry. Knowing these numbers should not completely decide your major for you- but it will help make your decision a little easier to make.

In 2014 the mining, quarrying, oil and gas extraction industry provided the highest starting salary ($97,100 average) and highest hiring rate, according to NACE.

However,  this fact alone do not mean it’s the industry you should pursue as it’s not the best industry for everyone. Because of this, the hangout will address not just who is hiring and what they pay- but what you need to consider to effectively evaluate what major will be best for you.

If you’ve already declared your major but you’re still not 100 percent confident in your decision- it’s normal to second guess yourself and to even switch majors. This major can help you confirm if you’re heading down the right path.

Sign up to attend tomorrow-  September 26th at 11am EST here.

Before Hangout Tip: Create a list of your questions when it comes to how to choose the perfect major for you. During the hangout you can send in any questions you have and I will answer them for you.

This entry was posted on Wednesday, September 24th, 2014 at 9:30 am and is filed under Back to School, International Student, Study in the USA. You can follow any responses to this entry through the RSS 2.0 feed. You can leave a response, or trackback from your own site.