Recording Arts for your Eyes and Ears 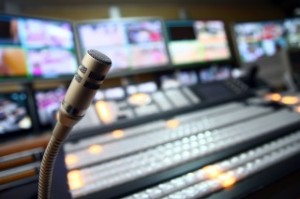 When people think of the recording arts, the first thing that comes to mind for most people is the audio from a recording studio. But to think of recording arts as just dealing with sound is to miss a huge part of the field. Sound interacting with visuals adds another dimension to any recording. Not only are you stimulating your ears, you’re simultaneously engaging your eyes. You’re seeing sound! Thus, international students who want to take their production skills to the next level ought to consider recording arts for the eyes and ears.

On the surface, the importance of both sight and sound seem obvious. We’ve grown up in an age of music videos and we’ve played interactive video games. Both of these smash visuals and audio together into a complete experience. Modern pop music concerts sometimes seem to be more focused on the visuals than on the music itself! Even holiday fireworks displays aim to artfully mix in music so you think you’re seeing sound in the sky.

But sound and sight (and even touch) have a much deeper connection. At its most fundamental level, sound is a wave, a physical wave moving through space. It is a tangible expression of air pressure caused from some source that makes its way to our ear. When you think about sound this way, it’s no surprise at all that we can see and even touch audio. People trained in recording arts know this well. All that coursework in acoustics and microphone placement relies on these fundamental principles of sound.

Some specialists in recording arts have found creative ways to show others how sound is more than just what we hear. Sudhu Tewari, who earned his graduate degree in electronic music and recording media, has been spreading his craft by using a stereo and an old television to demonstrate the sights of sound. By hooking up stereo wires to a TV’s tubes (yes, TVs used to have tubes!), the light emitted from the tubes shifts and changes as the audio is passed through the stereo. The result on the screen is a simple but infinitely fascinating realtime visual expression of sound. Whether it is a solid bass beat or the melodious tones of a pitch perfect singer, the lines and shapes on the screen add another dimension to the musical experience.

With the use of odd knick knacks, Tewari also enhances the demonstration by showing how touching parts of the “instrument” create not only different sounds, but different visuals on the screen. The whole project relies on extremely simple physical concepts, yet the experience of seeing sound and touching music brings it to life in a much more meaningful way than just reading a physics textbook on oscillating waves.

Tewari is an inspiration to aspiring recording artists who really love the fundamentals of their craft. So whether you’re considering school for recording arts, already in a program, thinking about a recording arts internship, or well into your career, take a moment to appreciate your ability to manipulate the beautiful integration of sound, sight, and touch.

No Responses to “Recording Arts for your Eyes and Ears”