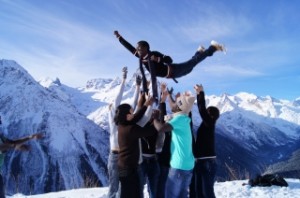 The entire month of July we received hundreds of great photos from students around the world who studied abroad- all who had the desire to share their best international photo with the hope of becoming one of the top three winners.

Although difficult, our judges were able to narrow down the over 400 entries to the top 20 finalists. The time has now come to announce the top three winners, and here they are:

While studying abroad in Russia, Peter and a few friends went winter camping near their University campus. Peter’s attempt at this Superman move landed him the top spot in the International Student Photo Contest! Congrats Peter!

Margaryta started playing the piano at age four- it was her passion for music while studying in Iceland that helped her became a well-known pianist. A photo of her first solo concert with a symphony orchestra is what allowed her to play her way into second place in this contest!

While studying in the Republic of Maldives, Rashi had the chance to experience paradise and was able to document it all. Not only was she able to study abroad while enjoying scenic views- she is able to walk away with the third place spot in the Photo Contest!

Congratulations to each of the International Student Photo Contest finalists, and especially to Peter, Margaryta and Rashi! You can view each of their photos here.

This entry was posted on Monday, August 19th, 2013 at 11:40 am and is filed under Competition, International Financial Aid, International Student. You can follow any responses to this entry through the RSS 2.0 feed. You can leave a response, or trackback from your own site.

No Responses to “Announcing the International Student Photo Contest Winners”