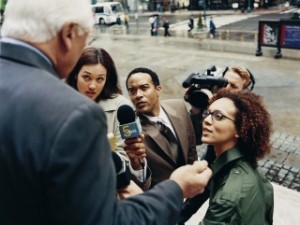 The broadcasting program tends to get intensive and very hands-on in its later years, but during the first half of a four-year program and especially the very first year, many international students studying broadcasting will find themselves mostly knocking down general education requirements. However, there is one early class that nearly all broadcasting students can look forward to within their first year: the Intro to Mass Media class. The Intro to Mass Media class (or one named something very similar to that) is probably going to be the first major-oriented course most broadcasting students will take. Let’s look at what can be expected of the curriculum and how it translates to the study of broadcasting.

The Intro to Mass Media class, as can be suspected by its name, covers much more than just broadcasted media. While broadcasting is an integral part of it, “mass media” also encompasses all print media and internet media (which relates to broadcasting in some but not all formats). This focus on non-broadcasting media is beneficial for a well-rounded degree in broadcast. General mass-communication theories apply to broadcasting too, and understanding broadcasting’s place amidst the overarching barrage of information thrown at consumers can only help you once you’re out there looking for one of the many potential careers in broadcasting.

An Intro to Mass Media class’s material is always significantly more conceptual than it is practical; as such, expect to be analyzing examples of mass media, reading theory, and writing critical essays rather than actually getting your hands on a camera or microphone. Again, don’t fret over this â€“ a strong foundation of general media knowledge is very useful in broadcasting. Plus, Intro to Mass Media is one of the more holistic courses available in a broadcasting major, usually covering a wide variety of media (you may wind up writing a paper on your favorite movie or band) and a good deal of history.

The Intro to Mass Media class isn’t your standard, hands-on broadcasting course, but it’s an important and fun introduction to a world larger than just broadcasting itself. Work hard on it to take your big first step into your broadcasting education!