International Students in the US Increased

Each year since 1919 the Open Doors Report on international educational exchange has been updated and published by the Institute of International Education (IIE). IIE, with the assistance of the US Department of State’s Bureau of Educational and Cultural Affairs, survey 30,000 accredited US institutions to compile data showing international student and study abroad trends throughout the years. 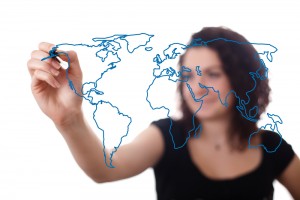 Where in the US are these international students flocking to for their studies? The top three states are California, New York and Texas. Top U.S. institutions include the University of Southern California (9,269), University of Illinois- Urbana-Champaign (8,997) and New York University (8,660). Some of the top fields of study include Business and Management, Engineering and Math and Computer Science.

Of course the flow of students runs both ways, the number of US student who study abroad has tripled within the past two decades and the latest results show a 1.3 percent increase. Fourteen of the top 25 destinations are outside of Europe, however, the top three destinations were the United Kingdom, Italy and Spain.

If you would like to view the full report and more on how international students in the US increased, please visit the Institute of International Education.

This entry was posted on Tuesday, December 4th, 2012 at 11:35 am and is filed under International Student, Study Abroad. You can follow any responses to this entry through the RSS 2.0 feed. You can leave a response, or trackback from your own site.

One Response to “International Students in the US Increased”